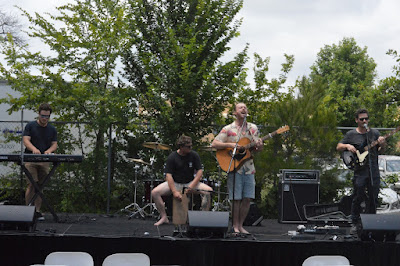 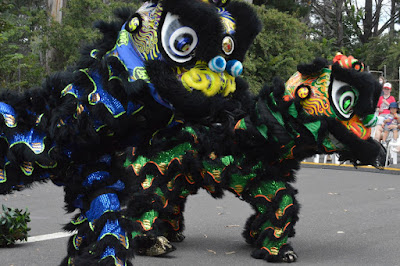 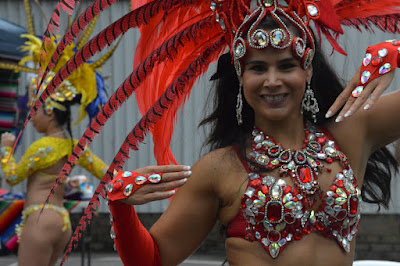 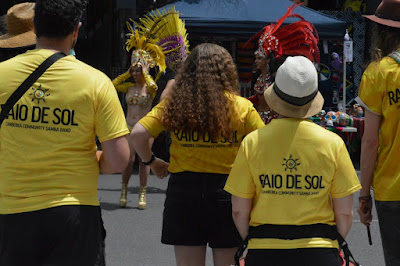 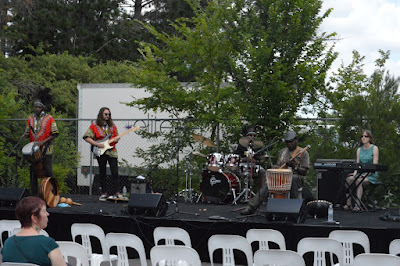 I should get to more festivals or the like.  It's interesting to see a range of performers together, on one or two stages, with continuous performance.  I got to a relatively small one for Australia/Survival/Invasion Day.  It was at the Harmonie German Club and called Australia in Harmonie : Collaboration of Cultures.  There were two stages for most of the day, one inside with that impressive stage and PA; one outside with a decent system and a hot sun.  There were various stalls, too, but too few attendees even for this free event.  Sad.  But I enjoyed my visit which was a nicely mixed view of a modern, relaxed, multicultural Australia with a strong Aboriginal component.  Good to move around the stalls, too, not least for one selling some very decent jazz on vinyl, Kool n'Krazy Records with Julian Gilchrist.  Just the outdoors entertainment first.  I arrived to see the Bobby James Band.  Original songs and one cover that I didn't recognise; guitar/vocals, bass, keys, cajon; lively and relevant.  Then into the Properous Mountain Dragon and Lion Dance.  Ah, China, that current bugbear of our incipient militarism.  This was noisy and fun, even without any understanding of the background.  Then, a little later, dancers and beats from Brazil.  Wow, of course.  Everyone loves MardiGras.  Just three dancers from the Escola de Samba, all doled out in feathers and sparse and  colourful costumes, wiggling to Latin beats from the Raio de Sol band.  Wildly popular with men and women alike although maybe for different reasons.  Whatever, there were lots of smiles and some wonderful grooves conducted by the group's leader.  I couldn't help myself, so I sat in on a free drum and watched and learnt only a touch of the complexities.  There is deep order and solid guidance here that's not so obvious at first glance.  And of course, hugely infectious.  Hot, too, in this sun.  Then some African music from the Zambesi River in Zimbabwe.  The group was Zambesi Sounds and the rhythms were very different but again wildly infectious.  Even reggae made and appearance here, as well as tunes we were introduced to as with quite political stories.  I like that.  Vocals/bass/perc, perc, keys/kalimba, guitar, drums.  It was hot outside, both in sun and music, and a lovely, relaxed, joyous outing.