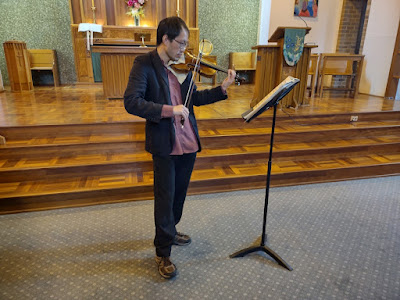 In music your CV is made up of where you have studied and who you have played with.  It goes for jazz and classical, if not quite so much for more popular styles.  I've been one degree from Australian Brandenburg Orch and ACO and SSO and obviously CSO and even Cold Chisel but I'll miss a coming opportunity with Orch of the Age of Enlightenment and Amsterdam Baroque Orch and a string of others because I can't play the Musica da Camera concert in November.  But I got to hear and record the leader for that concert, John Ma, at Wesley and it was special.  I love baroque music and he plays it with an understanding that is clear and immediate.  It's a softer tone, a more joyous and playful interaction, lighter and more dancelike.  And he played a series of lesser known composers, not least Pisendel, then concertmaster of the Dresden Orchestra and a god of the violin and perhaps an influence for Bach's solo works.  And prolific Telemann of the 3,000+ compositions who was considered lesser but has had once-thought-Bach works listed under his name.  And Baltzer (new to me) and Hoffmeister and a challenging etude.  And, as John said, the most prolific composer of all, Anon, this time from Saragossa.  There was Bach too, of course.  John mostly played a baroque violin, but ventured into baroque viola and also viola d'amore with its 14 strings, 7 played and 7 resonant.  I was amused when he questioned the number, but a violinist is used to just four, of course.  But the understanding and connection with the works were a pleasure and clearly evident and his patter was informative, even educational.  So this was a wonderously good Wednesday lunchtime concert at Wesley, booked at short notice when someone else couldn't do it.  So I will miss my closer connections because I can't play that concert, but I expect to hear it and I'm already in admiration for the playing and the player.  And John has returned with family to Canberra so with luck we'll all see him many more times.