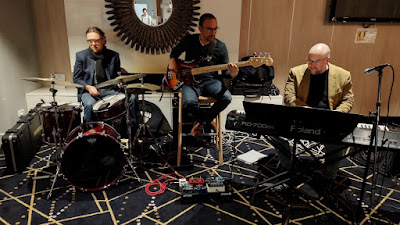 Yep, the jazz at the National Press Club is just a lazy Friday evening outing if I have nothing else to do but  that's not to denigrate it.  After all, I know the players and they are some of the best in Canberra and many teach at the ANU.  But they are just locals and mates and it's just a relaxed gig for after work on a Friday.  Yes to all that, but I was still floored last night and by more than the new beer I discovered.  Wayne Kelly was leading in the absence of Greg Stott and Jason Varlet and Mark Sutton were his offsiders.  The music was not just standards and walks (did I hear a standard?  I don't think so although they started with a blues), but great grooves and often popular numbers, not least Strawberry Fields and Message in a bottle and Walking on the Moon.  Then a Poinciana -like groove and latin-ish something and others I recognised but couldn't put a title to.  So the grooves were a delight and contemporary.  Then the solos, Wayne reasonably restrained although always delightful, Jason lively and expansive on his Jazz bass and Mark just a dream at times, sharp and precise and totally unaffected; glorious.  I'm not the only listener even if there's plenty of clicking and chatter too.  That's how a bar gig should be; this is just a classy one with great musicians.  Some of the best in Canberra.  What a great indulgence for such a free local club outing.  As for the beer, it was a Capital All Night Long Dark lager, all rich and chocolate. Check it out soon.  The website says it's only available until September.