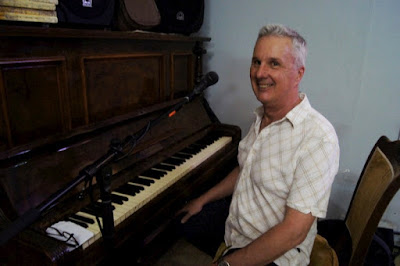 It's the Christmas-NY period and Canberra is like a country town again ... like when I arrived 30years back. Lovely, if temporary. The down side is a lack of events happening. The audience is at the coast or visiting rellies and the remains, in town, are bereft and otherwise sleeping. We had visitors and I found some music at Beyond Q Bookshop, that strange, little venue that presumably gets free performers. No way they could pay. Whatever, John Black was there and he was a great pleasure, stride, easy feels, thoughtful improvs and clear melodies, even with a piano that's slightly suss. The adults are always the pleasures in this game, and John is just that; well experienced and mellow and every chord and every theme nicely voiced. A pleasure. Ellington, Basie, Django, Booker T, NOLA feels. Very nice.

And before was renditions of the folk/singer-songwriter repertoire that we know so well from the '60s and '70s, mostly. Fred Pilcher played 12-string guitar, with vocals, with finger picking and capo, with talk of kazoo but I didn't hear one (did I?). Leonard Cohen, Bruce Cockburn ("at least as depressing") and a string of lighter tunes, not least a folk-humour take on Teddy Bears picnic. Nicely done and lots of memories but not so much my scene, this being being CJ after all. They may not have been paid too well, but this was a pleasant arvo in that singular basement that is Beyond Q.