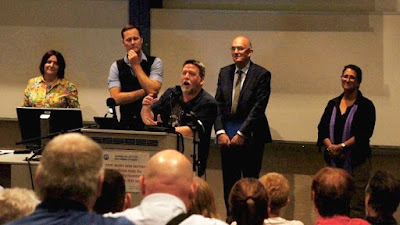 As an issue, I find climate change more scientifically decided, more inclusively dangerous than any other issue. I've been a fence-sitter on asylum seekers, uncertainly sited between utilitarianism and human rights. I recognised the nastiness of detention and the proto-fascist nature of language and information control that this (and previous) governments have used (it's all spreading: think metadata retention, ASIO growth, Border Force and more). I don't come at the term illegals: it's a blaringly obvious bit of political spin to manage perceptions. The correct terms are asylum seekers who then mostly become refugees. ("It takes one to know one", I think, as I hear the right endlessly going on about political correctness. If they don't manipulate language, no-one does: this is one obvious example). It was chair, Sophie Singh, who observed that the issue is congealed, with 30% pro and 30% agin, but there are 40% to be convinced.

I've been in that 40%. I've been no early adopter. I've been confused over the black and white of "open borders" and "deciding who will come to this country" but the ethics are finally exposed for me. I think of the camps, the government secrecy and spin and lies ("children overboard" even won an election), the hidden faces (no journos, no visits, no photographs, now gaol terms for whistleblowers, no photos for their privacy [as if]), the treatment of raped women and murdered men, the spin of saving others from drowning, the contradiction of international agreements on children and human rights, the thought control of terms like "illegals" (which Scott Morrison has mandated as government terminology), various facts like the $8k non-refundable visa applications for journalists who will be our witness (so much for a fourth estate as a check on government in a democracy) and the blackshirt Border Force uniforms I see daily as I go to swim at Civic pool (I shudder at this) and retrospective change of legislation that passed the High Court recently (as if we don't have core responsibility for, what, Manos or Nauru) and the misleading argument of saving lives at sea and the one journo ever allowed to visit Nauru (?) being from the Australian (even he confirmed another rape), and the 37 babies and the raped woman who seems to have been deceptively denied an abortion and the big-noting and undermining of recent reports of a raped 5-year old (as if we are supposed to know amongst all this secrecy) and the closed air space over Tampa and Ben Doherty's attempted visit and the hidden faces of these people. And the sheer cost of it all. And who are these "illegals" and what are they escaping from? Tamils from Sri Lanka and Rohingya from Myanmar and all manner from a Middle East we had a hand in reigniting. But Abbott was going to let in Christians (paralleling our generosity to white Rhodesians and South Africans, not all bad but also not colour- or culture-blind). We weren't always this way: think Fraser's Vietnamese on boats and Hawke's Chinese students. The ignorance-promotions, like the terrorists on boats (surely they are more likely travel by plane). It reminds me of Howard and his map of Australia showing just how overridden the rest of us were by the blacks, while it's the the blacks who have the social disadvantage, the 10-year shorter lifespan, the third-world conditions and the numbers in gaol. I could go on. I can just see the despair and feel the tragedy of us as a blinkered people. Thinking, or really not thinking, like Germans of the past, not like Germans of the present.

But what of the words of the speakers? The event was Spin and Secrecy : Refugees and the Media, a forum organised by the Refugee Action Committee and co-hosted by The News & Media Research Centre at the University of Canberra. The chair was Sophie Singh and the speakers were Michelle Dunne Breen (News & Media Research Centre, UC), Paul Bongiorno (Ten News Contributing Editor), Ben Doherty (Immigration Correspondent, Guardian Australia) and our Guardian/ABCRN favourite First Dog on the Moon (Walkley award winning cartoonist, as he chucklingly reminded us). Suffice to say they said much of the above and more. The event was packed. The concern was shimmering. The awareness and knowledge was evident. There was some despair. But the fight continues for an ethical country, and this is at the forefront. Not that we should forget climate change: that's one for all humanity and any possible future. The asylum seeker issue is one for 37 babies or 1,852 detainees or even the 60 million refugees from whatever violence around the world. It's a matter of national conscience and good on those who act on it.
Posted by Eric Pozza at 9:56 pm