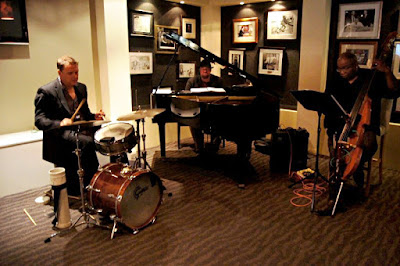 It was just the National Press Club and it was just a Friday evening gig. The players were amongst the best, but I didn't expect this, here, now, an after-work outing. It was Wayne Kelly and Eric Ajaye and Mark Sutton. Even so, I didn't expect what I heard. This was hot: burning blows on just two chords, a world of colours, driving but relaxed grooves, solos of inevitable consequence easily passed between seemingly nonchalant performers. Easy for these guys. The vamps were a marvel - as rich and deep as any I'd heard. I thought of my fave albums of the '70s era. Too much for a chatty club environment? Nope. Not too loud, so the chatter continued, but the music's wealth was noted and applauded. They might not have been quietly attentive, but they were cluey enough to realise the years of skills and the informal virtuosity arrayed before them. As good as it comes; at the NPC lounge, on a Friday. Astounding! Too bad about the piano tuning.