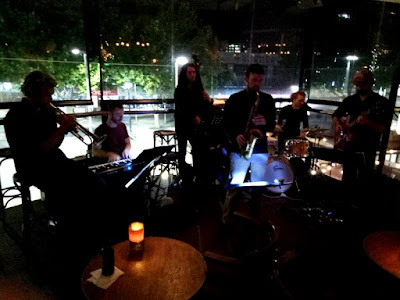 Antipodes was my second concert for the night. Less than a concert, really, because I only caught 2 tunes from the second set, but these were fascinating and only went to confirm the chalk and cheese difference of these styles and of the range of jazz played now. John Mackey's concert had been Coltrane, intensely spiritual, relatively simple structurally and melodically, open and interactive and improvised. Antipodes was far more ordered, written, its loose space bounded and arranged. Here there's extended unison melody, arranged structure, different sounds. The guitar was strong and driven in its solo; a synth appeared; bass and drum took solos at the end, drums playing against a riff. Not sure I caught a trumpet or sax solo in these last tunes, or from Luke on keys, but they would have earlier. The environment was different, too, of course, Hippo's noisy cocktail atmosphere, so I was envisaging as much as I was hearing. So different from JM; so much a modern take on the history; complex in composition as well as improv. They are about to record this music. Can't wait to revisit it. Maybe to hear what I didn't from a late arrival and some tech probs and Hippo's busy space.