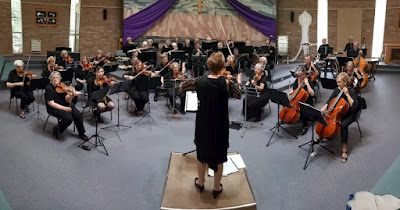 I've got an affection for Brindabella Orchestra. They were the first orchestra I played with when I took up this style a few years ago, so it includes lots of friendly faces. This was their end-of-year concert and included a few works that I've touched on with them in the past. The program was a collection of marches and dances. Short works but by big names - Elgar, Delibes, Berlioz, Beethoven, Dvorak, Saint-Saens, Orff. Plus a Telemann that was a concerto rather than a dance or march, and a few modern dances from Fiddler on the Roof and Jamaican Rumba. So, an entertaining and lively program.

I particularly liked the first, Elgar Pomp & Circumstance no.4, and the Telemann viola concerto Gmaj. Viola has such a nicely rich tone, I guess the alto to the violin's soprano, but it's a less common concerto instrument. Marilyn Moir played that one with considerable panache. I admire concerto players for the individual tone they must draw from the instrument; she did it nicely. The whole was conducted by Rosalie Hannink, sometimes cellist in the orchestra, oftentimes conductor. Brindabella is just another of the tapestry of classical groups in Canberra, one of several local symphony orchestras and an enduring joy for a committed group of players. Great to hear Brindabella again.

Brindabella Orchestra played a program of marches and dances at Queanbeyan Uniting Church. Rosalie Hannink (conductor) convened and Marilyn Moir (viola) soloed for a Telemann concerto.
Posted by Eric Pozza at 10:28 am