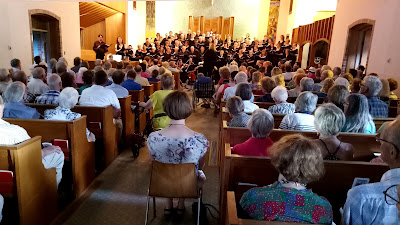 We caught L'Enfance du Christ at Wesley, performed by the Llewellyn Choir. It's one of Megan's favourites, although she knows it in the original French. This was in English. I could understand some more, of course, but it's never easy to catch lyrics. Reading some, I'm not sure it mattered. What I read was a strangely domestic thing, just a passage of St Matthew's gospel, in Berlioz's own words, in three parts, telling of Herod's and his massacre of the innocents and the flight into Egypt by Mary and Joseph with the baby Jesus and the arrival at Sais. It lasted a little over 90 minutes, with a shorter middle section, apparently written first and expanded for the final work, comprising the most famous tune, the Shepherd's farewell. In addition to the large choir of 80 SATB singers, conductor Rowan Harvey-Martin led five singers (one woman as Mary and four men) and the Llewellyn Sinfonia of 19, mostly made up of CSO players. The work was very attractive and admirably performed so the time went easily and we were treated to three final carols for Christmas, including Silent night where our sing-along was invited. So, a lovely work that I'm very glad I caught, well presented in an intimate venue. Even from the back, we could see enough to be involved even if the choir was offside in the stalls for some of the time. Wonderful.

Thanks Eric, so glad you were there; it was a joy to be singing, and the tunes reverberated in my head for many days.