To Anaheim and places in between 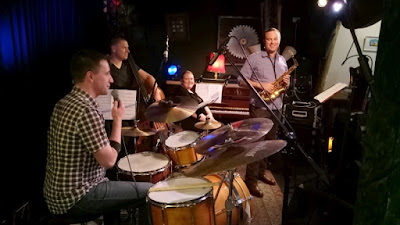 Steve and his mates started in true jazz tradition with Moment's notice, a Coltrane standard, but this was a much more diverse performance: Sting and Scofield, Lyle Mays and Crowded House, Bobby Timmons and Jamiroquai, Todd Gustavsen and King Crimson. Steve noted the contrary derision between prog rock and jazz as overblown or pretentious ("they can't both be wrong") but played it anyway. Good. It gets in my history somewhere amongst the clarion call of Music to Midnight. I know Steve and Barney well from performing with them and hearing them around often so I had full expectation of great skills and sharpness and got it. I was floored at times with Barney's clever runs and some stupendous fills, and Steve's slick and deceptively easy rudiments and the rest.

I didn't know Adam on alto and he was a pleasant discovery. Alto can be relatively shrill to the deeper tenor but, especially as he warmed up, I was taken by his quick chops, his clarity and precision, and his increasing softness of tone and phrasing. But it was Sally who was such a find on the night. We all know Sally well, of course, but I hadn't heard her play too often and especially not recently, and she's reputed as a composer and I think of her that way. But her playing was a revelation. Maybe it was the composer's vision, but her solos were glorious melodic displays, playful harmonic interludes, self-evidently structured, capably sequenced, richly vibrant and coloured. And then to spell her invention, Steve and Sally played an improvised duet, latterly named, at the gig, as Nigel's song. There was softness and tinkling start and finish, rolling handfulls of notes, cowboy grooves, Chinese snippets, funky stabs, C20th atonality, a quote from Caravan, this and more against toms and a snare without wires. Lots of possibilities; a composer's mind. Then a jazzer, You and the night and the music, the only American songbook excerpt despite a few jazz tunes, Moanin' and that Coltrane hit. And to finish it all, a Disney tune. Steve explained he'd got a 3-year old around the house so is aware of Disney songs. I don't so can't identify it but it was cute and cheerful as a final tune and just highlighting just how diverse this program was. Nice band, nice gig!