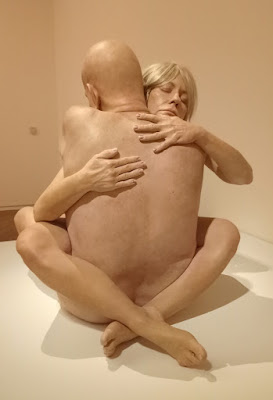 I remember being taken by some super realist paintings at the Contemporary Arts Centre in Adelaide over 30 years ago. So now we have hyper reality and it's largely sculptural and it's on display at the National Gallery. I admire the skills of the detailed paintings and sculptures but there are some that leave me cold. There were some like that in this exhibition, even if I marvelled at the accuracy and the skin details and tone,

often seemingly coloured and covered with make-up. Maybe they weren't but many looked that way. But the issue with these works is, do they say anything? There were some that were truly beautiful and realistic but also told stories of people and love and life. Like the huge naked man and equally large (in both height and belly) naked pregnant woman. And one devastatingly beautiful and touching grandmother holding baby. That was below life size but big in tranquility and love. There were a series of naked women, not least one series clinically exposed. Well, I'm a bloke and I can appreciate women's bodies but it's all over the Net and I wonder just what this was saying. That one didn't say much to me but a lovely intertwined, life-sized older couple in the corner spoke volumes. Megan joked "that's us" and we're not so far off. Then the next room had wheelchairs with old men of different dress motoring independently. We could walk through these: another example of self-drive vehicles. Patricia Puccinini (of the ACT's memorably odd hot air balloon) was represented with several life-like but unearthly creatures that drew unexpected compassion. I feel she's got a good heart.

An early room was mostly detailed but obvious people-copies. A final room seemed more of cartoons or fantasy. Of those, I most enjoyed the challenges of modulating people (liminal?) moving from one state to another. And to end it all, a large theatre in the round and a fascinating, bewildering film of animals and people in various forms and roles - beautiful, detailed, oddly contrasted - from seven projectors with classical musical accompaniment. There was a little more, but these were key. I'm taken by the technique but also yearn for a purpose. To me, some had it and some less so.

Hyper Real was an exhibition at the National Gallery of Australia.