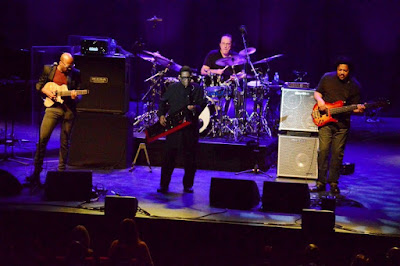 It might be 12 years late, but I finally saw Herbie Hancock here in Canberra. I missed him last time. Twelve years, but the band is little changed: Herbie, Lionel Loueke, Vinne Colaiuta, James Genus (was Nathan East). Herbie is 79 but you wouldn't know it. This was authentic, power-charged music with references to his history, some great solos and driving rock-strength grooves.

Herbie played Korg Kronos and a fabulously forcefully-miced grand piano and a Roland keytar. it looked like Lionel played guitar but the solos sounded like synth (I had to look twice at his first solo) with perhaps traditional guitar sounds coming through quietly in chordal acompaniment. Nary a pick passed his fingers: this was all fingered chords and single notes. James was busy, bassy and a little bass-endy and lost in the mix (at least from where I sat) until he took to soloing where his sound was eminently bell-like clear, playing mostly finger style, but also thumbs or classical-like finger style. Then Vinnie, solid and strong, not overly polyrhythmic if more adventurous in solos (two) which featured some incredibly challenging ostinatos an stabs from the band. Lionel did several solos with loops, richly complex, and accompanied by his voice in harmonised. Herbie did vocoder voice, too, that strangley otherworldly vocal sound. James blew out everyone with another stunning looped solo and his other was no work of slouch. Various tunes form Herbie's history appeared for a line or two through the concert, then diffused into grooves, perhaps to reappear and diffuse again. The Headhunters era featured, but there were others too, better recognised by others of the jazzer family who attended. But it was a full house and there aren't so many jazzers in Canberra, so there were lots of unknown faces with a few jazz regulars amongst the crowds. They were all impressed. Two promised to burn their instruments next day (hopefully the instruments have survived). Suffice to say, this was a lesson in strength and power, complexity and familiarity, richly arranged but still open and fresh. A blast.