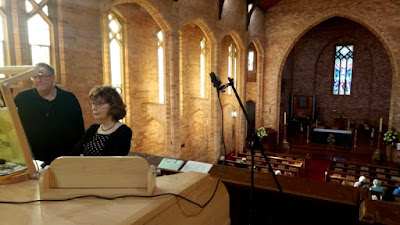 I've lamented the poor visuals of organ concerts before. This was another RSCM concert, at St Paul's Manuka with organist Anne Marie Neilsen. I was lucky enough to be in the loft with Anne Marie so had a decent view. The respectable turnout below couldn't even see an organist's back, sitting as they were in pews facing the altar with the organ loft behind. But that's how it is. But in the loft it's a workingman's experience, close to the pipes so they are genuinely stereo, hearing the clumping on pedals and the noise of blowers (or heaters in the Canberra cold) and feeling the vibrations of the boards below us responding to the pedalling. But what a sound! MA played Bach, Mendelssohn, Durufle, Franck and Vierne without interruption. The driving inevitability of a Bach fugue, the pensive melody and harmonic sequences of the Mendelssohn, the mighty religiosity of this Durufle, some variety from Franck and the amusing play on the instantly recognisable bells of Westminster. All played so convincingly by AM. I'm intrigued by the organ playing, fingers stretched to sustain notes, diverse manuals with their pre-set sounds and pitches and the variety of tones and those deep and powerful pedal notes. It's a thrilling thing and must have been an outlandish experience for mediaeval listeners in churches in the days before amplification, when nothing other than nature (and gunpowder) was so loud. As with much (European) art of the time, it was just further proof of the power of God. In our more secular age, we hear these things as art or entertainment but are aware of their power and beauty. I feel religious art is not of our time: a visit to the modern galleries at the Vatican Museum were just evidence to me. But the experience remains true and beautiful. Loved it.