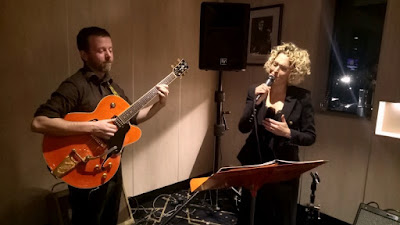 We had Friday evening off and that's National Press Club jazz evening. The unexpected was that Sally was playing with Lachlan rather than Brendan. Nothing unpleasant, these being consummate players, just unexpected. Somewhat different, too, being vocals&guitar rather than the unusual combination of vocals&bass. Lachlan does a good line in bass, too, so there was bass awareness accompanied by the more evident harmonics of the guitar. [Excuse the digression, but Beethoven himself said: “The guitar is a miniature orchestra in itself”.] The tunes were much the same, deliriously lovely and often-enough somewhat touching. The songs of the American songbook are like that: discrete but straight to the heart and mostly of the heart. Nothing unexpected: Softly, Paper moon, Witchcraft, Our love is here to stay and the like; transposed. Unexpected but no surprise and just lovely.