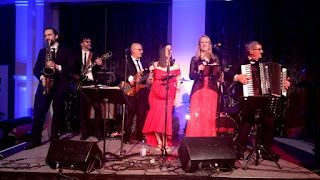 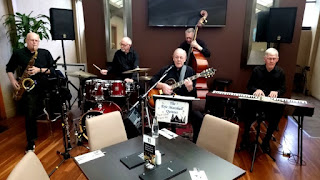 I was off to Adelaide for a few days; a family visit so little expectation of music. Except these. The Pulse played at the 70th anniversary ball of the SA Italian Association. The picture shows most of the band but not the keyboardist who was off to the side. A nice, lively dance band playing Italian, light jazz, bossas and the like. Tight and obviously enjoying their outing. Then a quick visit to Port Adelaide for some Sunday afternoon jazz with the Eric Marshall Quintet. They advertised as Frank Sinatra, Michael Buble and the like, so inviting to my Mum and fairly popular and with vocals. The sax was nicely lithe, the bass had a really decent tone, vocals/guitar/leader Eric had some funny jokes to fill time. Not the latest of contemporary jazz, not the best attended gig, but perfectly satisfying with a few beers. We passed the Entertainment Centre (10k seats?). Perhaps the audience was at Hugh Jackman's song and dance spectacular that was on there. Certainly the lines were long.