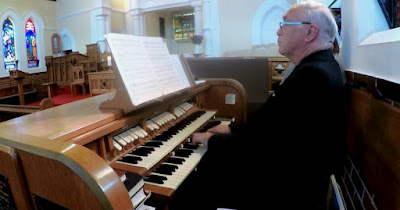 My organ tour continues through the churches of the ACT. This one was the Canberra Baptist Church, Kingston, near Manuka Pool and Oval. It's an old church (1929, old for Canberra) and claims to have had an organ since its inception. The current organ was built 1958 by JP Eagles and subsequently restored. It's none too decorated, with pipes exposed but the sound was attractive. Bill Fraser played a varied program: Thiman, Bach, Mendelssohn, Ireland, Wolstenholme and father Lloyd Webber. Interestingly, he noted the Bach may be a ring-in, as his name was given to the works of some others (this was his Fantasia with imitation Bmin) and it did sound a different Bach. The Lloyd Webber was the father of the famous LWs (Andrew and Julian) and was an organist and composer. Otherwise, perhaps the Mendelssohn fugue was my favourite. These monthly concerts from the RSCM (ACT) [=Royal School of Church Music ACT Branch] are nice lunchtime outings if you get a chance.

Bill Fraser (organ) performed at the Canberra Baptist Church for the Royal School of Church Music, ACT Branch.
Posted by Eric Pozza at 9:18 am