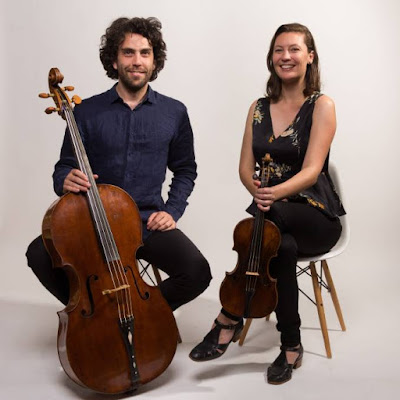 We are relatively lucky, living in Canberra, the bush capital, relatively close to nature, but it's still something we miss or ignore or that passes us by. I realised it seeing some beautiful views of red soil, then gum bark projected at Wesley. We know it but forget it. It wasn't quite so 50-years ago, but we are more urbanised now. It surprised me. The event was a strange and informative session (hard to call it a concert) entitled Where song began featuring two mates I know from the Australian Haydn Ensemble, Anthony Albrecht and Simone Slattery, cello and violin. Both are exceptionally trained and musical; both have glorious tones and skills. In fact, I thought Anthony's Bach Prelude no.1 (from cello suite no.1) was the most intense rendition I have heard.

And Simone hit me for six (it's Ashes time) with Schmelzer Cucu Sonata (1664) or was it David Lang Anthochaera carunculate (Red Wattle Bird) a new commission (2017); perhaps both. And she sung decently too, especially Ngarra Burra Ferra, an Indigenous hymn. But it was more. This was an exploration of Australian songbirds out of Tim Low's book, Where Song Began : Australia's Birds and How They Changed the World, and further afield, a broader touch on the environment. There was science and species and nature melded with music and performance all in low light and flittering feathers. More than just a concert. I'm still processing it and I learnt quite a bit but mostly I just learnt our distance from nature these days. The end-times of climate are enough to confirm that. I should have known.

Simone Slattery (violin, vocals) and Anthony Albrecht (cello) presented Where song began at Wesley. And thanks to Anthony and Simone for the use of the pic.
Posted by Eric Pozza at 9:28 am