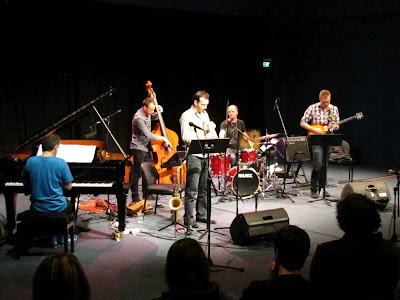 My path to jazz was from Cream and Hendrix through Yes to the great jazz rockers, Mahavishnu and Weather Report and Return to Forever, then through Music to midnight to the jazz tradition. I’m not alone and it seems I share this background to some degree with Mark Isaacs. I heard his Resurgence Band at the Jazz School at the start of his current national tour and it stunned me. His words on the cover of Aurora, the album he’s touring, talk of this very history and how it deserves revisitation. You can hear it clearly in this music: the infectious melodies of Chick Corea; the supple grooves of Weather Report; the soaring guitar and unison lines of RTF; the contortions of Mahavishnu. These were obvious. The rock grooves and the chunky bass patterns were par for this course and wonderfully solid but responsive. Not a swing in sight. But there was a real richness of composition. It struck me just like when I heard Chick Corea playing No mystery recently at the Opera House. Long and contorted and deeply involving, fascinating and lyrical and with great detail. This is written music and it demands good readers given the complexity of melodies and the counterpoint exercised by the front line instruments. But there’s also a live component here, of composition or at least arrangement. I noticed Mark signalling bass to come in (yes, bass dropped out several times in this music and the effect rendered orchestra-like variation) and he was otherwise conducting crescendos and the like. Conducting and orchestration are attractive words here, because the classical/jazz crossover was particularly identifiable in this band. Most charts were more like complex lead sheets - charted melody and chords - but at least the piano chart for Will of the Wisp was fully charted dots that crossed clearly into classical detail. And the accompaniment that Mark laid down sounded of classical technique and harmonic conceptions: complex and rich, technically impressive and conceptually whole. And his solos were coloured and mobile and full handed and expansive over the keyboard and sounded to me of twentieth century classical styles, rather than single note jazz sax. He did one extended passage that was classical in form. This was mostly minimalist, but I heard tonal colours that I associate with Debussy, but I’m little educated in this. Mark suggested to students that they listen to William Walton and Khachaturian concertos. I spoke to him afterwards and he said classical people say he sounds like jazz, and jazz people say he sounds like classical. That sounds right. Whatever, it’s a wonderfully attractive but also musically satisfying crossover. 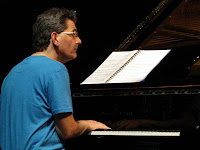 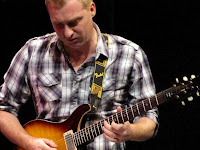 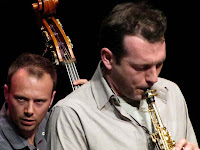 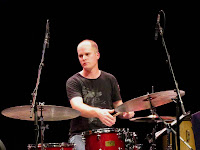 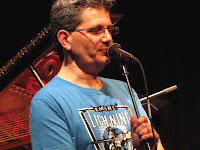 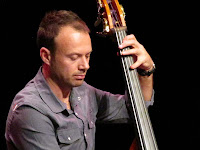 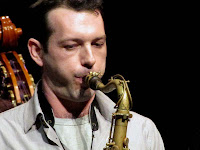 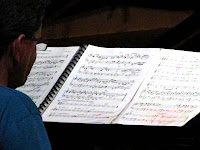 And what of this band! One passage had me thinking of James Muller as Aussie pub rock on harmonic steroids. Here he was playing rock grooves with distortion and sustain, shrieks wrenched from his guitar, blatant and prolific with long lines that reached to the guitar heavens. Mostly it was those same shredded lines but cleaner and always defined and uplifting and exciting. Always virtuosic. James is one of those players who grabs a band by its … well you know what I mean. Matt Keagan appears to me as more restrained and concerned with tonal purity. But he too let go with intense and busy harmonic washes with a free-jazz lack of restraint, on tenor but also on a soprano that sounded of the Kasbah. I just love Brett Hirst’s playing so no surprise how I found that. This was fat and funky and in some ways a departure from the jazz rock tradition, which is usually fast and furious on e-bass. Double bass is slower, but the tone was delightful and I preferred it, and the chunky grooves sat so well and were so well varied. His solos, too, were stunners and quite unique - probably because double bass isn’t the common instrument in this rocky context. They ventured over the neck with blues and other lines, but to me they were infused with groove more than melody. And Tim Firth was wonderful: open to all the surrounding performers, bouncing ideas with his sidemen and highlighting features in the charts with clarity while chopping up the groove with improv and doing all this at nicely controlled volume levels. Suffice to say I liked the band!

I’d heard this very combination once before at Wang and they were playing music that was very similar. I must have been concerted-out because I didn’t get it like http://www.blogger.com/img/blank.gifI did this night. This was my own history and maybe I’d dismissed it, as jazzers easily write off jazz-rock. Not this time. I thoroughly enjoyed this music and after this night and the recent Chick Corea/RTF concert I have a new respect for it. This is a classy jazz-rock fusion with lyricism and virtuosity and richly informed classical influences. Fabulous and even awe-inspiring. Mark Isaacs (piano, compositions) led his Resurgence Band with Matt Keegan (soprano, tenor saxes), James Muller (guitar), Brett Hirst (bass) and Tim Firth (drums). Carlo Aurango is touring as their sound man.