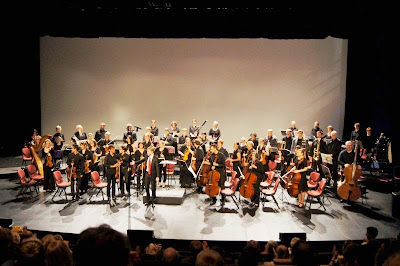 National Capital Orchestra tag themselves as Canberra's other orchestra. After today's concert, I can believe it. This concert was excellent. Remember, this is not a professional orchestra although a few players may be otherwise paid. They are a community orchestra; they pay to practice and play; they perform three or four gigs per year. But their training is solid (7th grade suggested) and their commitment is clear. Not that I'd expect commitment to be weak in any community orchestra - they're not just in it for the money and probably not even for the fame.

NCO are about 50 players wIth a generous percussion section (at least for this concert) and all parts covered, although pretty light on bass (just one, David Flynn). Leonard Weiss conducted a program called Carnival! The Carnival was Saint-Saens' of the Animals, with two pianists, James Huntingford and Andrew Rumsay and narration by Peter Smith. Gliere's Russian sailor's dance and four Dvorak Slavonic dances preceded the Carnival and Rimsky-Korsakov's Scheherazade followed the interval. So, two solid hours of performance. The Carnival was a joy and a belly-laugh amusement from pianists and orchestra and narrator. Scheherazade was performed impressive skills - I was watching David especially but this was tight and with effective dynamics and impressive chops throughout. The Gliere struck me for the first notes with sharp intonation and sharp togetherness and the Dvorak dances were similarly attractive and effective. This was sharp, professional playing from an amateur orchestra. Most impressed. Now to practice for my own outing in 2 weeks with Maruki. Here was a challenge!