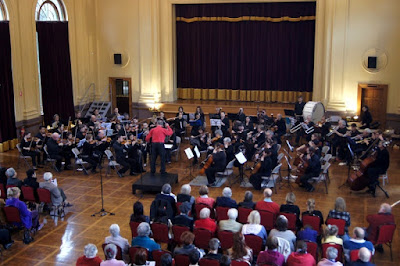 How do you come down off this? Tired but elated. I've just performed my fifth symphony concert, my second with Maruki Community Orchestra. Program? Dvorak Symphony no.9 From the new world; Beethoven violin concerto; Strauss Emperor concerto. I recorded and it's quite decently presentable. I found new mistakes to play, but fixed some others from rehearsals. I left the mute on for the second half of the Dvorak. Neither were mistakes that others didn't complain of. I wonder how the profs do it. To what degree do they hide mistakes?

I guess quite frequently; covering is a professional skill that musos don't acknowledge too readily. Maybe those recordings don't get published, but then the recording I was using for reference had coughs and frequent clarinet squeaks and more. That was not pristine, either, but neither was it the Berlin Phil. John Gould, our normal conductor, played the violin concerto and it was a stunning achievement. But then John has history with the London Symph and more, so not unexpected. Leonard Weiss covered as conductor for that piece and did a wonderful job. There's something about performance that demands and draws the best of your playing. Nothing unexpected there, but the playingn was the best to date in rehearsal yesterday and peaked today with an audience. It's adrenaline, commitment and more. The bass section was Matthew and me, and Matthew did a great job despite his recent entry to the orchestra. But then, he's got serious background. I remain somewhat in shock, but elated and exhausted. Not an easy job, this, playing hours of dots, not least with the intensity of Dvorak. But how cool and how exciting it this!

PS. A few days later. I've listened to the recordings. I'm more relaxed about it all. Maruki takes on the real thing; these charts are just what Berlin or Vienna or London Phil play. This time it was Beethoven and Dvorak with Strauss to warm up. We're a community orchestra, so we can't expect Heaven, but this gig was good. Better than the previous Beethoven 5. It helps to have some experts like John and Lennie amongst us. And this was a significant event in other ways, too. John's 75th birthday (his next Beethoven Violin concerto is at 80) and Maruki's 10th anniversary. All exciting, but nothing like the thrill of doing it and getting those hard bits right when they are got right. For the errors, well, there's another day. Thanks to Maruki and John and Lennie. Great stuff and much enjoyed.
Posted by Eric Pozza at 9:47 pm