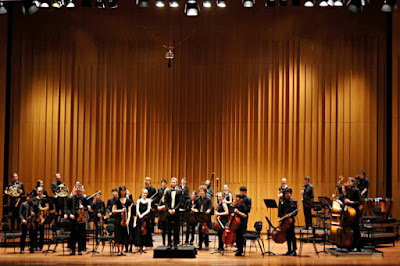 Back to Llewellyn for another great pleasure. I hadn't heard the Canberra Youth Orchestra before but I'd played with some of their members and I was impressed. CYO have a good reputation and this concert just confirmed it in my book. The first piece was Strauss Die Fiedermaus Overture and it started with such precision that I was relieved when just a little imprecise intonation appeared later. They were heavenly in those first notes and then at least became human. But all through, the music was done with admirable poise and maturity. Leonard Weiss was conducting as the new Musical Director. He leads with a great sense of dynamics and guidance and the orchestra worked well with him. He's only 23 or so, so this is a genuine youth orchestra, although mature beyond its years. Then Nimrod from Elgar and an odd thing, a bassoon concerto, by Weber, played very nicely by Matthew Ventura. Then, after interval, Mendelssohn Symphony no.3 op.56, his Scottish symphony. This was not an easy play and they did it with panache. I groaned in sympathy with the basses for some long lines of semiquavers in the final movement. They played it all or, at the very least, covered like professionals. That's how things are in this playing. So I left with considerable joy and exhilaration and huge respect. The national version, the Australian Youth Orchestra, will be here at Llewellyn for its summer camp and free concerts in January and I expect a few of these players will be on stage. It all bodes well for music in Australia even if they have to leave Canberra for further study. So, the eternal question, "what's the matter with kids these days?". In my book, nothing: the kids couldn't be looking better.

The Canberra Youth Orchestra (CYO) was led by Leonard Weiss (conductor) at Llewellyn Hall. Matthew Ventura (bassoon) performed the solo in the Weber Bassoon Concerto.
Posted by Eric Pozza at 11:40 am