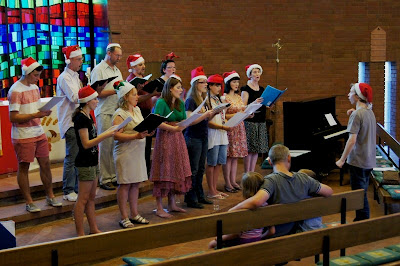 It was on a notice board at work that I saw the announcement for this choral concert. The choir was Echo Voices. I’d never heard of them, but it was local and we were free so we dropped in. It turned out to be a lovely and quite unexpected interlude.

Leonard Weiss led the choir. He’s a current ANU student of composition with long experience in choirs. Echo voices are a community choir. They’d first met in July and this was their first public outing. I was pleasantly surprised by the first songs, with several notable voices, both male and female, and some decent harmonies and decisive dynamics. Some more complex counterpoint was less settled, but nothing that time and experience won’t iron out. The repertoire was also a pleasant surprise. From traditional Scottish bordering on shanties, through some well knowns, like Silent night and Lock Lomond, and Icelandic and English and olde French. I recognised Coventry carol, lovely with its tragic story and moving parts. Also interesting, and well sung, was a tune volunteered to the choir by local notable Judith Clingan. To my ears it combined simple harmony with a satisfying melody with one chromatic move. We were invited to sing along with the final song, We wish you a Merry Christmas, and I saw but didn’t hear mouths moving. But the good will and joy at the end of the first concert was evident and families and friends settled in for chockies and cherries and Christmas cakes. Interestingly, Leonard mentioned that the ANU School of Music had supported the choir in purchasing some charts. I wonder if this is indicative of the new role of the Music School as a catalyst in the community. We’ll have to wait and watch, but it would win back some of the ill-will that was so evident following last year’s blitzkrieg. Also thanks to Canberra Grammar who provided the rehearsal and performance space. They are doing some very good things in music outreach these days.