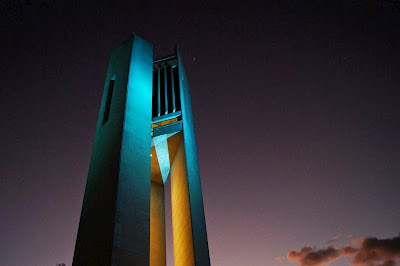 This was a cold one. We stood and shivered our way through a series of pieces on the Carillon. The wind blew through the recording I made. But the pieces were interesting, more so than some other Carillon gigs I've heard. A few locals were represented, people who know the carillon: Larry Sitsky, Leonard Weiss, Kate Moore. Kate's tune was commissioned for the carillon for this festival. One of Leonard's tunes was previously commissioned. There was a rag from Elena Kats-Chernin and she's sometimes in Canberra so may also know the carillon. Kate has lived in the Netherlands for the last 13 years and knows any number of carillons: they are a thing of the low countries and thereabouts. The Carillon plays with two hammered keyboards and a pedalboard. In action it looks heavy, played with clenched fists.

Some sounds are deep and some light and airy. I warm to busier passages, where the harmonies become more evident with runs of notes. But pairs of notes are playable and Kate used them in her piece with cello. That was the only composition that was not solo bells. Kate's piece was For Elyse, with sustained cello played over regular harmonic accompaniment from the bells. Particularly mystical in that cold and falling darkness. Strangely, I am told the bells are only heard in the keyboard room, high but below several stories of bells, through speakers. Kate's cello was acoustic and processed and heard in the keys room, but heard over PA at ground level, with the bells sounding acoustically. Lennie played several of his own pieces; Lyn Fuller is the chief carillonist and played others; Thomas Laue and Anna Wong played others. It was a struggle against the elements, but intriguing and a pleasure.