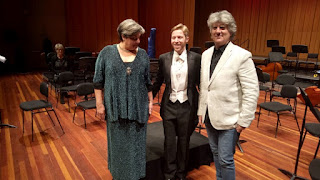 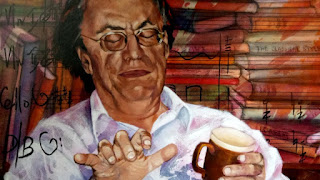 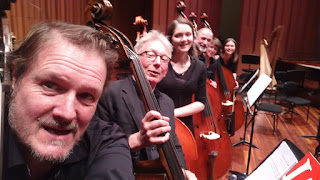 The day was all leading to the Llewellyn stage and our National Capital Orchestra performance of Gorecki, Gordon and Smetana. In the inverse order. The Gorecki was his Symphony no.3, better known as Symphony of sorrowful songs. Gorecki was apparently a serialist, but then produced this, his religious work, to be rejected by the modernists. It's a strange piece, long at 55 minutes, slow and sparse and meditative, with occasional soprano singing of three pieces over three movements, of women's laments, one Mary for her crucified son, another by a young girl from the wall of a gestapo cell, a final one by a mother lamenting her son lost in Silesian uprisings in 1919/20. the work starts with depp, slow bass and continues pretty much throughout, with dynamics and rising pitch at various times. Louise Page sang the songs, sad and slow and pensive but dignified. I came to love this work with playing so not surprised how well it was known amongst musos and how much they wished to play it. And it's got a following. One guy at the afterparty had come from Sydney to hear it: he'd otherwise heard it numerous times. The first half from lighter and livelier. First up Smetana The Moldau, a programmatic piece picturing the Moldau river that not least, runs through Prague. Then Christopher Gordon Ceremonial Games. This was a world premiere of this suite of comprising three movements (from 13) written for the opening ceremony of the Melbourne Commonwealth Games. This was more grand, lively, even rocky, with times switching between 4/4 and 7/8 and moving through arpeggiations, then to a dramatic end. Great fun and great to play for the composer. Then pics and after-party and congrats. Much enjoyed.