I'm not the first to fall in love with Mozart and I'm sure I've enjoyed him immensely before, but playing his Symphony no.40 with Musica da Camera was an emotional high. It's such a fabulous work, with such intrigue and unexpected variation and sometimes surprisingly modern phrasing and outlandish energy and the rest. 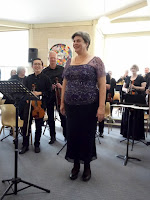 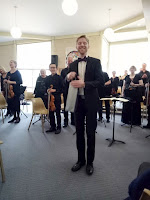 I was stunned. And this was just the second half. Before interval was a series of opera arias with our Canberra diva, Louise Page, out front with the orchestra often hanging off Lenny's baton when the time goes vocal-led rubato. Louise is such a convincing performer and her voice so intimate and apt, but you don't appreciate all the art as you accompany. You have other things to do; your listening in accompaniment is different from the listening of a concert goer. But this was a hugely satisfying concert and we get to do it all again, this time in Goulburn, as is the way with the paired concerts of MdC. A deeply satisfying Saturday outing despite smelly flowers and the rest.