A sparse musical year but a packed weekend 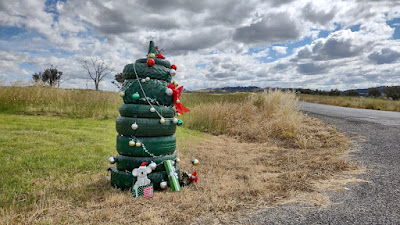 It's been a busy musical weekend with Mike's oratorio sandwiched by a pair of Musica da Camera concerts.  It's my last concert of the year.  MdaC always plays a local concert, in our rehearsal venue, a church in Cook, then we tour to a local town for a gig on the Sunday.  It's fun.  This time it was again at Gunning.  They have a decent music import system from Canberra and maybe Sydney.  We play in a hall that's awash with reverb.  I don't always like that, but did this time.  The group seemed so large and loud and sweet and mercifully resistant to highlighting mistakes.  This was a program that's been in preparation for yonks.  Originally for September with Lizzy Collier as director.   That was kyboshed by Covid, then Lizzy was to take this December concert but had an operation and is in moonboots for Christmas.  So, we got a new conductor, Craig Woodland, head of music at CGS and very expert.  Not many mistakes passed his ears!  The program was not an easy one but not too long.  Plenty of tricky early C20th complexities.  Penderecki, FS Kelly, Holst, Foote and Dvorak.  Not an immediate favourite, but I did warm to it.  Preparation, even after this extended time, was interrupted.  So a few slipups Saturday and a few others on Sunday, but pretty well covered.  We had some guests form NCO, Angela Liu and Elizabeth Alford, but especially Jodie Petrov playing excellent flute as the soloist.  The horn and harp also added new colourings.  So busy: Friday night final practice, gigs on Saturday and Sunday.  It's a busy weekend but you can only love it with such a capable ensemble and exciting visitors.  And the touring: I've done hardly any so I can still enjoy it. For the sights and more.