We’re in Melbourne and my online trawl of the jazz clubs showed Niels Rosendahl was playing at Paris Cat. Niels' a friend of CJ and singing would be popular so we chose this gig, Belinda Parsons Beetet. In the end, Niels wasn’t playing but it was a great choice. I could tell from the first bars, with a groove set and then a wash of trom-tenor and three glorious female voices in perfect harmony and always that insistent beat. We’d struck a winner. That was jazz in that broad sense, of training and skills and precision applied to all manner of contemporary music. I recalled ‘60s/70s R&B or soul given those harmonies and grooves and horns, but there was pop and jazz feels and odd times and unison lines and solos, of course, even if one was likened by a mate to Pink Floyd. And the original tunes, virtually all written and arranged by Belinda (only one using her husband’s harmonies) with touching themes, of lost lovers and departed friends. I bought the album so lyrics will be an interest. So there was humanity here. And then I started hearing names for the Melbourne scene for faces I didn’t easily recognise. First up, Fem Belling and Nina Ferro. No wonder the harmonies were sweet! Then that fabulous bass. Philip Rex. Ah, yes, I knew that face after all. From a fellow bassist, I was floored, but hardly unexpected. And that drummer. Ryan Menezes was tack sharp, steady but driving, fluid but also powerful in repetition. A masterclass. An early solo just confirmed that. Delicious. No keys, but funky chordal guitar with solos that milked reverb and loops and the like, that Pink Floyd effect, and very insinuating. And those two horns, Jordan and Ron, sweet and arranged, filling spaces and echoing emotions and then telling true solos, although it was their ensemble work that got to me. Than back to Belinda herself. She was in her element, pleasing and personal but also profound at times. A firm voice, sometimes letting go into the clouds as in soul divas, spelling arranged lines with horns or singing a ballad with a smaller band and a big heart. This wasn’t the album launch, but almost. The tracks were pretty much in order but the relaxation was evident and spoken of. They were celebrating the return from Melbourne lockdowns, too. This was in the fabric-hung lower room at Paris cat, with jazz images on the ceiling. The audience was intimate (for this read small) and the atmosphere was relaxed, and I think of the chops and training on stage and the immense pleasure of it all and the commitment needed for the art. Let’s put the numbers down to a preceding thunderstorm. Numbers were small but in no way was the music. It was capable and original and purposeful, as music should be. Have a listen and maybe download a copy. Belinda Parsons Beetet is on Bandcamp and the other streaming sites. Loved it. 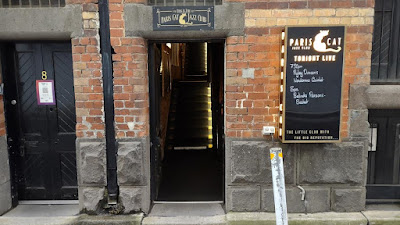